If you are following esports and competitive online gaming, you will probably have heard the term pro scrims before. In this article, we will explain the concepts of pro scrims and also explain what it is and how you can join pro scrims yourself. 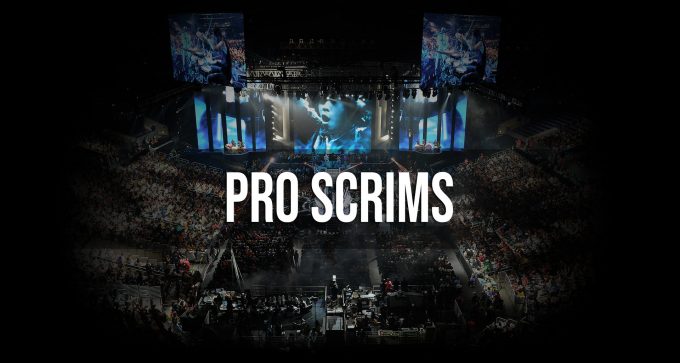 What are pro scrims?

Pro scrim is an extension of the word scrim, which is a shortening of the word scrimmage. In general, a scrim game or scrims, are when competitive players and teams in online games play a practice match against each other. Pro scrims are more or less the same and refer to professional teams and players practicing against each other. They usually do this before playing on ladders, ranked or in leagues and tournaments. Pro scrims are, therefore, a way for competitive and professional players to practice against fellow competitive players and improve their skills and team play, before going into actual ladder matches and competing against each other.

Why do teams do pro scrim? Bootcamps and pro scrims are done in order for the best players to improve their online gaming skills. Being a top-tier player and or team requires that you constant develop and follow and adapt to the current meta. If teams would not go into pro scrims, but instead just play against random players in pub matches, they would adapt their play-style to the level of their opponents and probably perform worse in actual tournaments against better opponents.

It should come to no surprise that to become the best, you will also have to play against the best. This is also why we see regional differences in skill level. Teams will usually practice against other teams in the same region. This is due to the nature of online gaming, where the latency is very important. European teams physically placed in Europe playing against a team physically placed in America will encounter some lag depending on where the servers are placed. Naturally, teams will more often practice against other pro teams in the same region. In CS:GO, Overwatch and other games we sometimes see teams from specific regions have a higher concentration of professional teams or players in the competitive scene.

Pro scrims are not excluded one game but are present in almost all online games that have a competitive element. We have covered Fortnite Pro Scrims before, but pro scrims are also conducted in other games like Counter-Strike: Global Offensive (CS:GO), Overwatch, PUBG, Dota 2, League of Legends, Rocket League, Rainbow 6. In general, all online games with a big competitive scene will have teams practicing in pro scrims.

We hope this article has helped deepen your understanding of pro scrims. If you have any comments or something you would like to add, please leave a comment.

If you are interested in pro players, we have made several lists of professional players from various games.

Comparison: Nvidia RTX 20xx vs 30xx Series
Guide to Keycaps
How To Level Up Skins & Weapons in VALORANT
All Ranks in VALORANT
Steam Screenshot Folder Location