Counter-Strike: Global Offensive, or simply just CS:GO, is a game that can be customized in many ways. One way is the developer console, which gives users access to heavy customization of everything from radar to the crosshair. However, to be able to tweak your in-game settings and commands, you need to know what commands to use. For a more in-depth guide on configs, check out our CS:GO config and autoexec guide.

In this guide, we will be going over a special type of console commands in CS:GO – the sv_cheats 1 commands. These are often referred to as CS:GO cheat commands, or CS:GO hacks or hack commands. The reason is what these commands do, as they can often archive the same thing as some CS:GO hacks.

Before we start, you will need to enable these commands, and also we will go over some common questions about the commands. 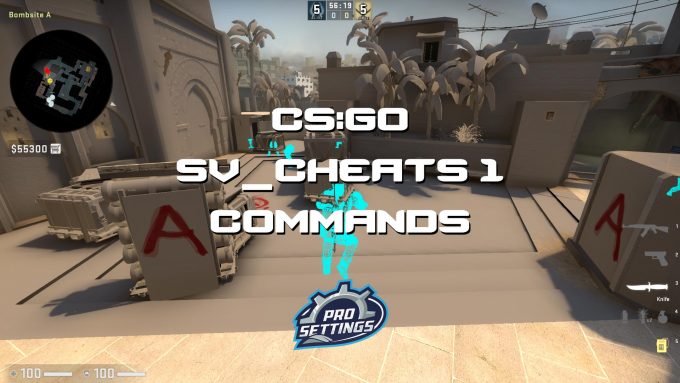 How to enable SV cheats commands in CS:GO

Before you can use any of the following commands we will go over, you need to activate sv_cheats in the server you are playing.

This can ONLY be done by the server moderator/admin or in the server configuration itself. This means that you will NOT be able to use these commands in public CS:GO games or in competitive matches. If you join a server through the server browser, you will be able to use the commands IF the mod/admin has activated sv_cheats, you cannot activate it yourself without getting permission.

Now, with that in place, how do you actually go about activating these “CS:GO cheats”?

If you create your own server, for example by starting a game with bots, or settings up a server where you are admin, you can activate sv_cheats with a simple console command.

Open up the developer console, and type the following:

The default value is 0, when sv_cheats is set to 1, it means that it has been activated. Please note, that it is not only activated for you, but for everyone in the server. So everyone else will be able to use the same commands, except bots.

Will I get VAC banned for using these commands?

Absolutely not! Since these console commands and cvars only works in a server where sv_cheats is activated, you will not be VAC banned for trying out the commands in your own server, and the commands will simply not work in competitive games or public CS:GO games.

So do not worry, you can safely try out these commands in your own server – they are “VAC proof”.

Now that you know how to activate the commands and you feel confident that it will not get banned, let’s hop into the commands.

Most of these commands are made for testing purposes for the developers, but people often refer to them as cheats and give them names related to cheats and hacks. We will use the same terminology here, as it gives a good indication of what the commands do.

If you are interested in more console cheat commands that mimic CS:GO hacks, we have made a CS:GO hacks with sv_cheats 1 guide.

These commands imitate what can sometimes be achieved by using real hacks and cheats (which will get you banned). This includes being invincible, see through walls, and many other fun features.

A lot of people are looking for an in-game aimbot command or auto-aim command. It is actually possible but requires you to hold your crosshair on your targets player model when you are activating the command.

How to: Point your crosshair to the enemy player you want to have “aimbot” on. Type the following in the console and hit enter:

Now every time you shoot anywhere near the target, you will instead hit their head with a headshot.

Wallhacks mean that you can see other players and objects through the walls. There are a few commands that will you get a feeling of a wallhack, and we have listed them from the best to worst below.

No Recoil and No Spread

Get 100% accuracy, even when running and completely remove randomness from shooting.

These commands work a lot like classic cheats you would find in a computer game. Giving you invincibility, infinite ammo, and the ability to move through objects.

These commands will change like the game renders, much like the “wallhack” commands from earlier in this article.

These commands are not as useful, but nonetheless they require that sv cheats are enabled in order to function.

This is a list of “give” commands. These commands will spawn weapons, grenades, knives, and other utilities.

For more give commands and how to give and pick up knives in CS:GO, read our All CS:GO Give Commands Guide.

Before you can drop your knife and pick up a new one, you will need to enable “knife dropping”.

How to drop the knife in CS:GO, type the following in the console:

The default value is 0 (knife dropping turned off).

All the commands in this article can be combined, so it is not up to you to try out various combinations. Taking a few friends into a server and enabling some of the commands can be quite some fun, and I recommend you to play around with the “speedhacks” and infinite ammo commands.

This guide has been written with inspiration from this SV_Cheats console commands guide. So if you are interested in deeper insights then go check out that guide. They have also made a complete list of sv_cheats 1 commands.

If you know about any commands that have not been listed here, please leave a comment on this article so we can include the commands here for everyone else to enjoy.

All CS:GO Give Commands
CS:GO Hacks & Cheats with SV_Cheats 1
How to Activate Developer Console in CS:GO
How to disable and mute radio commands in CS:GO
All CS:GO HUD Commands