VALORANT features a lot of different weapons, which you can buy at the start of each round, much like the CS:GO buy system. In this article, we will go into details on what guns are available, and what the best weapons in VALORANT are. If you are new to the game, this guide is a great place to start. If you are a competitive player, it is a must to know the economy around the buying system, gun mechanics and the best guns in the game.

Since the game is still in beta, a lot may change with time. We will keep this article updated. If you see something wrong, please leave a comment. 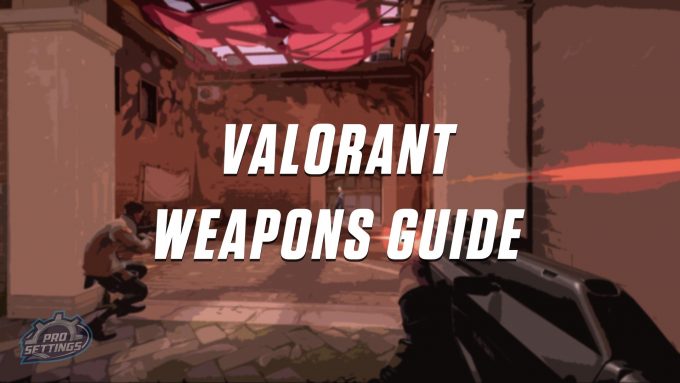 Weapons can be bought at the beginning of each round via the buy menu. To in-game currency is called “Creds”, and weapons have different prices.

If you have played CS:GO before, this will not be new to you. You can use the buy menu/shop to buy guns, armor (shields), and abilities (these act like grenades in CS:GO). 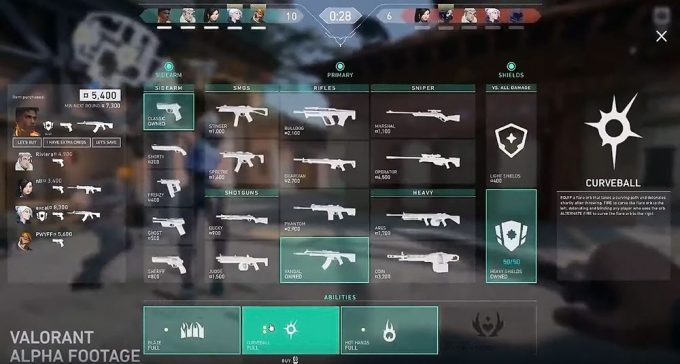 Example of the buy menu in VALORANT.

While we don’t know much about this yet, we DO know that each gun has its own unique recoil patterns. Again, if you have played CS:GO before, this will be familiar to you. Some of the rifles will also feature aim down sight (ADS), this is usually guns with a scope.

Overall, there are five different categories:

Besides this, there are possible also a melee weapon

The primary weapons are split into various categories:

These are the assault rifles available in VALORANT. These are probably going to be the most used guns, as they offer a great variety in use cases (best for range, but can also be used in close combat).

Two different SMGs are available. SMGs are cheaper than rifles but tend to perform worse in ranged combat. Their strength is usually in lower recoil while moving.

Like with SMGs, two different shotguns can be bought. Shotguns excel at close combat but are close to useless in ranged combat.

Heavy rifles, or LMGs, offer a large magazine and therefore can shot a lot more bullets compared to other guns before running out of ammo. The trade-off is less mobility, as they are heavier and bulkier.

VALORANT offers two sniper rifles. These correspond to the scout and AWP in Counter-Strike: Global Offensive.

From the start, there will be five different sidearms available. One is the default pistol that all players begin with.

Shields works like body armor in other games. In VALORANT two kind of shields are available:

Everyone has a melee weapon, which is the tactical knife.

Each agent has unique abilities.

You can read more about the agents and their abilities in our VALORANT agent’s guide.

The best guns and weapons in VALORANT

You might be wondering what the best guns or weapons are in VALORANT. Since the game is still in early development, we cannot be certain and it will also be subject to change. From previous experience and taking the price into consideration as well as the maps we have seen so far, we have taken the freedom to make an educated guess. This is heavily based on the fact that guns and game mechanics are very similar to CS:GO.

The best rifle in VALORANT: The Vandal

It is our prediction that the Vandal will be one of the most used guns in the game. Its reminiscence of the AK-47 from Counter-Strike will probably mean that it will be a headshot machine.

The best sniper rifle in VALORANT: The Operator

Again, drawing on experience from CS:GO and the similarity the Operator shares with the AWP, our prediction is that this will be the go-to sniper rifle. It will probably be a one-hit-wonder, killing enemies with one shot to the body.

While these two guns will probably be the favorites and most used guns, we have more predictions.

SMGs might be used in rounds where money (or creds) are low, so-called “eco rounds”. They will probably not be used much outside of this.

The same is true for the shotguns that will be somewhat niche, even though we could be wrong on this. Maps seem a tad smaller, and shotguns might be more viable on some maps.

The Sheriff will probably also enjoy some glory, as it will likely do a lot of damage and in general reward precise aiming. It could be the go-to gun for aim gods, whenever they are low on money.

Another prediction is that the shorty will be a popular sidearm buy. It might complement a long-range rifle or sniper, in situations where you will get close to the enemy.

We hope that this guide has helped your understanding of the guns and mechanisms. If you have any questions or corrections, feel free to leave a comment.